Nevertheless, I have found a new personal favourite. A Torontonian brewery located in its own eponymous Mill Street. 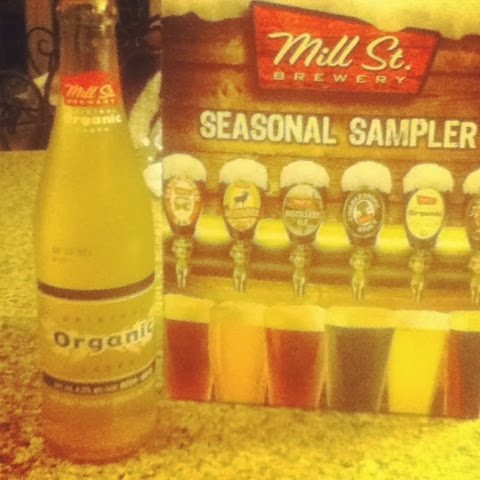 (Grab a pack and hold onto your butts folks. It's going to be a bumpy ride.)

And by bumpy, I mean to say, pleasantly surprising. Melody picked up our first sampler a couple of weeks ago, and it was good enough that we went out and bought another as a Christmas gift for my uncle's partner, and a six pack of the organic lager for ourselves.

My friends. I'm here to report a few of the highlights. 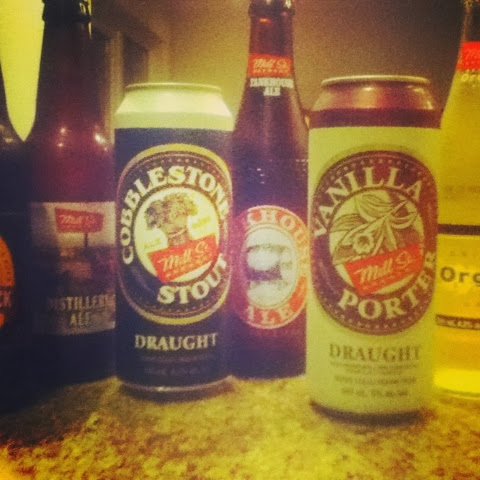 First of all, the presentation of the bottles and cans is a big deal. Perception is important, as right off the bat I perceive original taste pallet and scent pairings. We've all heard of chocolate porters, and if we haven't, then we probably don't visit the craft section of the liquor store as often as we should. Mill St went a different direction with their vanilla porter. 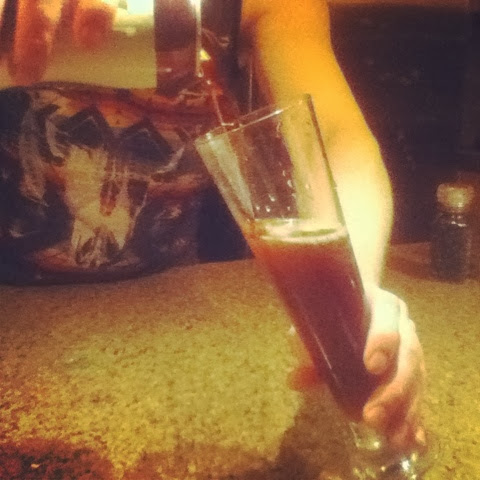 The vanilla shine and finish give the beer a complex flavour on top of its lightly bitter and already rich character. As porters go, it has a light flavour which the vanilla notes complement. It has the odour of Christmas, but not in the sense that it should be confused with a holiday beer. This beer has an identity of its own, and is quite pleasant. Perhaps on any special occasion, and not simply a holiday.

The organic lager on the other hand is a different story. The jilted promises of Corona's light smoothness pale at this truly light lager. For me, lagers are a source of boredom and discontent. Same old same old floating in an overwhelming sea of new and hip top fermenting microbrews. But stuff all of your storage beers where they belong and make resolute your New Year's promise to change old habits. Mill St Organic Lager is a thing of beauty.

It's a light beer without the tacky 'light' label. It's organic. It's only 4% for fellow lightweights who want to spend more time getting to know their beers before forgetting their name's the next morning. And of course, it is smooth. Oh so smooth.

In the vein of winter warmers such as hot toddies and spiked coffee, I decided to give grog a try. Now, I detailed this experience in my recent navy inspired bartending video, but the time given in that video simply isn't enough justice for this old navy gem.

For those of you who didn't watch my video, here's the recipe:

Mix the rum, sugar, and lime juice together by stirring or shaking, before topping off with hot water and your slice of chosen citrus fruit. 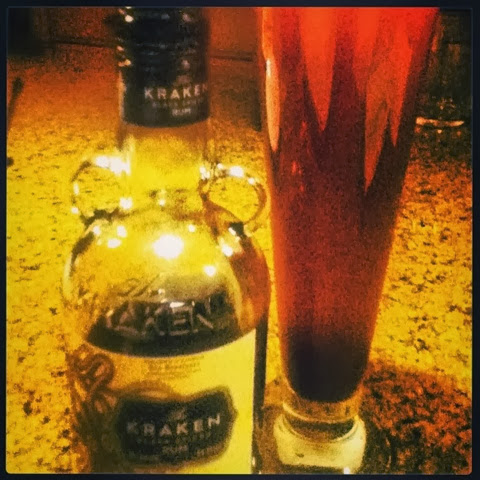 The drink was named after its inventor. One admiral Edward Vernon, or 'Old Grog'. He created the drink, intending the combination of ingredients to work against scurvy. It didn't work any more than one would expect, of course, but the drink lived on for some time.

Today, its fallen out of common usage, but people still remember the word 'grog', and associated with an old times drink of unknown origin. Except of course, now you know!

The First episode of 'The Bottle Opener' youtube show is now ready for your viewing eyes! And I had a ton of fun making it too! Of course, like any "firsts" there are a lot of learning curves and hurdles that need to be addressed and overcome.

On the technical side of things, I need to think more about filming multiple takes of scenes, especially since I'm committed to doing the show completely unscripted. That adds a lot of pressure for coming up with things off the top of my head, but the idea is that I don't want to be "acting" through my scenes.  On that same note, my show has a few classroom gimmicks such as history lessons and 'in the kitchen' instructions. I move these sections along with my very dry sense of humour. Heck, even the background music choices are meant to be subtle jabs at the cheesy music often used in these things. Along the way, I seemed to pick up a bit of cheese too, though. So dry humour will stay, but toned down by ridiculousness and slapstick.

My next biggest hurdles to cross are going to be video editing, sound quality, and video quality. For the editing, this is a matter of practice and patience. As for sound quality, I'm going to have to find temporary fixes until I can budget enough money to getting another microphone. Sadly the microphone I have is not ideal for capturing noise at a distance, but I'm stuck using it for the time being.
Posted by Thomas at 11:55 PM No comments:

Once in awhile, the opportunity to be brave and try something new (or rather, old) pops up, and curiosity rears it's head. I was skimming through some of the obsolete 'martinis' at work the other day, and came across the Metropolitan.  It isn't a martini in the sense that its some kind of 'Martini', but rather, that it comes in a martini glass. I know I know, semantics. 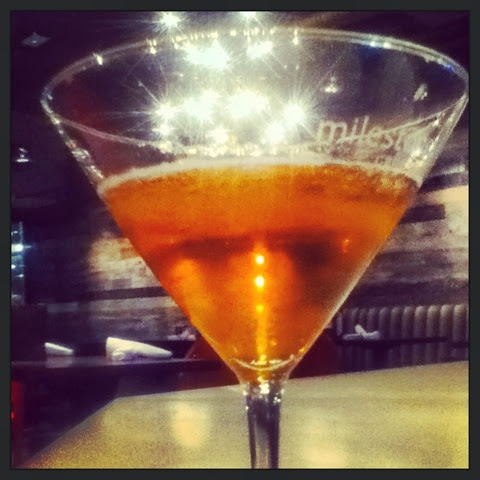 Regardless, I mentioned the Metropolitan to my bar manager, having seen it before. The name and recipe reminds me much of the Manhattan, of which I am admittedly a fan. It caught my attention for being quite similar the Manhattan and a brandy cocktail.

The recipe is as follows:

So I made my version without syrup. In a word, oops? Okay okay, maybe it wouldn't have made it better. Or perhaps the brandy of choice is to blame? We used 'Napoleon', since it's much cheaper than the other brandies we carry - all cognacs. I don't know much about brandy, as I mentioned earlier. I can't really say where the mistake was in this, if there was any mistake at all. I didn't like it, and sadly, neither did my coworkers. However, this hasn't put me off.  I've tasted a few cognacs which I did thoroughly, and while I would not like to mix down the flavor of a pricey cognac, I am still intrigued at the various possibilities of this cocktail.

Let me know what you think in the comments section! I would love some advice on brandy, if you can give any!
Posted by Thomas at 12:14 AM No comments:

I'm going to keep this update relatively short, and sweet.  After going over several name ideas for some time now, I finally settled on The Bottle Opener, for the title of this blog.  The idea wasn't mine, really.  My girlfriend mentioned it, after I had spent some time struggling with a good name. Actually, I was more or less pressuring myself to come up with a new name one night - settling on the idea that "it had to be tonight".

So this is an 'official' title relaunch.  I'm not sure what that implies - other than that the title of the blog has changed, and it's official - but I like the new name. And that's that.
Posted by Thomas at 3:19 PM No comments:

Email ThisBlogThis!Share to TwitterShare to FacebookShare to Pinterest
Labels: social

A few weeks ago I made a blog entry detailing a recent excursion to Moxie's. one drink in particular left quite an impression. That drink was the Black Spice Mojito. It was everything I wanted in a beer cocktail, marrying the famous mojito with a deep amber ale.

I was left inspired to recreate the drink, which I did. My version has only a few changes from the original. What I've done is prepare thin slices of ginger, to be muddled with brown sugar and mint. Next I add an ounce of dark rum, two squeezed lime wedges, and shake with ice, before topping with roughly three ounces of Rickard's Red (a personal favourite), and ginger ale.

The finale is to garnish it with a few healthy looking mint sprigs and skewered lime wheel and ginger. 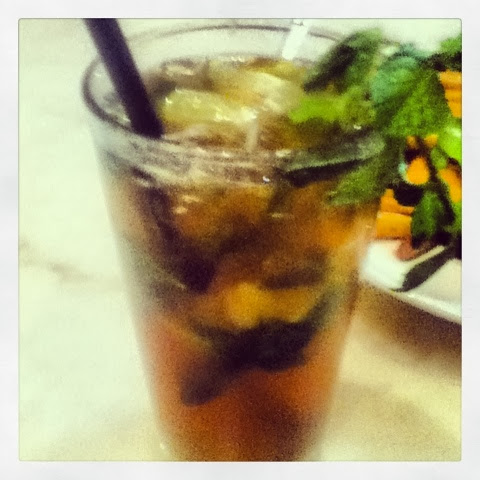 It tasted quite like the original - unfortunately, a bit too much like the original. However, since coming up with this 'copy', I did have a few ideas on how to make it stand out more as being my own thing.

Once again, I also really want to say 'good job' to Moxie's for coming up with this. Really, you deserve the praise for this one!
Posted by Thomas at 10:45 PM No comments: